Types of Data Visualizations in Games

While there are many, I believe there are two primary types of data visualizations used in games:

These are visualizations which provide status information about players or characters, such as: health, score, experience points.

The primary goal of status visualizations is enable players to make gameplay decisions (prospective choices) or to give players information on what has happened (retrospective decisions). Sometimes, they do both - as with progress indicators (such as how much experience is left to level up, or what kind of buildings can be built).

As in data visualizations outside of games, some choices are better than others. For instance, a bar chart can be pre-attentively processed, meaning that it can understood subconsciously in under ~100 milliseconds. This is an especially important consideration for games. Text must be read before it can be processed, which means it cannot be preattentively processed - which also means it will distract a player, because they have to draw their attention away from the game. 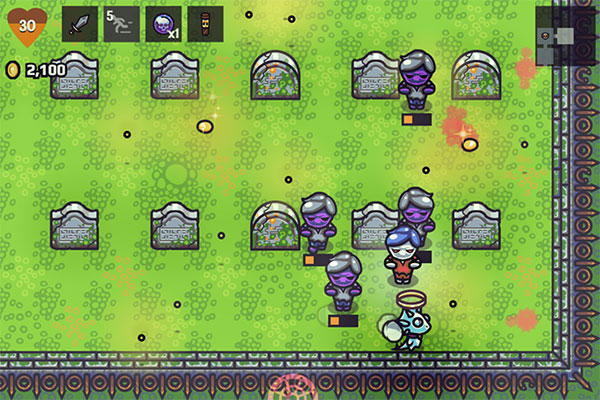 There are multiple status visualizations here: Health (a number and bar chart in the shape of a heart), resource count (money, displayed as a number), current weapon (a dagger in the square next to health), various other items and item counts (other boxes with icons and a number), position on a map (minimap in the top right), and enemy health (bar chart under each enemy).

Status visualizations can be targeted at the current person playing the game (e.g., in a single player game), hidden from other players (e.g., information asymmetry in games like Starcraft), or explicitly shown to other players (like in social games, such as in Massively Multi-player Online Role Playing Games - MMORPGs). The kinds of status visualizations and which players can see them (in online games) have massive impacts on the game's design.

These visualizations may use status visualizations, but the goal of these visualizations is to improve gameplay. They can be seen by other players, but usually are tailored for the individual player of the game. Charts that show status over time after the game session has ended are an example of training visualizations. However, only a subset of games incorporate these kinds of charts.

An example of this kind of visualization can be found in Starcraft 2 after a match has ended. After each game, various graphs are presented which show how the game progressed for each player over time for various dimensions, such as army size and economy. 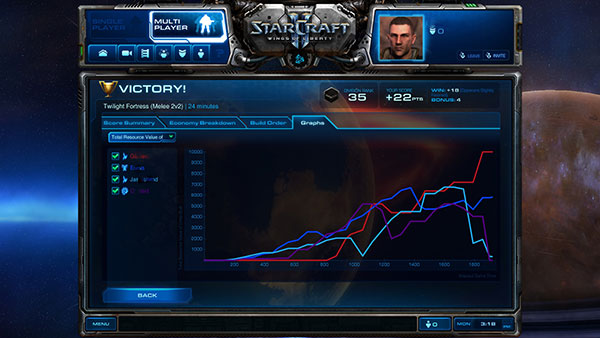 Many skill-based games like Starcraft or League of Legends also capture all gameplay and allow you to watch it as a replay. By watching replays, like in sports, players can see where their gameplay broke down and make better decisions next time. More skilled players will often upload game replays to allow others to learn from them; some people, like Day9, even provide extensive replay analysis.

How games use data visualization

In these kinds of games, an abundant amount of training visualizations exist to help you improve your gameplay. Like chess, progress is all internal to the player of the game. Like chess, these games are based solely on skill: the only advantage you have in the game is your ability to play it. Each game session is self contained, and pits your skill against another player's skills. If your gameplay is not improving, you are not learning, your skill is not increasing, and you cease having fun and stop playing.

All games, including skill-based games, use some forms of status visualizations. The way they are used varies amongst genres.

Skill-based games use status visualizations to assist your gameplay decisions, but can only provide assistance. The "Fog of War" is a visualization in RTS and other similar games that allows you to only see what your units can see. You are prevented from seeing the enemy's information, and this information asymmetry is a key part of a game's design. The player must make the decision to scout or to attack blindly. And, even if you do have information of the enemy base, often times the enemy will have units hidden elsewhere; or, they might be baiting you in. Even if you had "perfect information", there is the additional layer of the enemy's skill in maneuvering their units, or in how well the enemy can micro-manage their army. With these games, visualizations alone play small roles in the in-game decision making process.

Other genres of games, such as social games like Massively Multi-Player Online Role Playing Games (MMORPGs), have different data visualization goals. In these games, your progress is largely in-game. As such, the need for traning visualizations is lessened. While these games certainly involving learning and difficultly, they are not inherently skill-based. In social games, in-game visualizations provide more decision making power. For instance, in many MMORPGs a "consider" system exists which color codes enemies by difficultly: 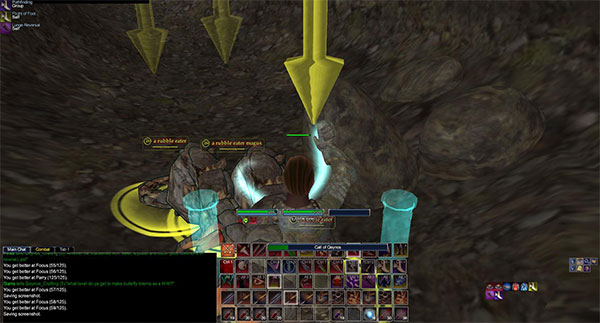 In Everquest 2, enemies are colored by difficultly. Yellow means the fight will likely be tough. Just having a single piece of information about the strength of the enemy will inform your decision to attack them. If an enemy "cons" green, for instance, it means the fight will be trivial. In these games, the data visualization is the main driving force behind the decision making process.

Many games use visualizations that are, in a sense, "outside" of the game itself. Their purpose is largely to motivate you to keep playing.

Nearly all online games use some sort of data visualization to provide social motivation, such as custom appearance options, which has little impact on gameplay.

Other games, such as League of Legends, also makes use of social motivators. In League of Legends, you can purchase custom "skins" for your character which have no impact on gameplay. However, custom skins act as a social status symbol to other players. Your kill:death record is also public, and some players may be motivated to play to increase their total games won, or their rank in the ladder / tournament system.

Most games these days include some sort of achievement system. Achievements act as visible indicators of progress. If these are public, they can also act as social motivators. If the game is fun and enjoyable, achievements can enhance gameplay. If the game has ceased to be fun, however, achievements can act as ways to keep otherwise unengaged players motivated to keep playing.

For many games, like League of Legends, data visualizations don't distract much from the game. Seeing a player's health bar, or the minimap, or the fog of war, does not ruin immersion. For some genres, like Multiplayer Online Battle Arena (MOBA) or Real Time Strategy games, this kind of information is critical. 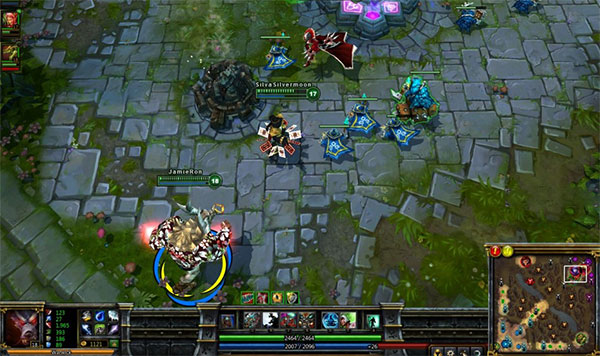 Diegetic interfaces help make a game more immersive. If a health bar and ammunition count are displayed in a non-diegetic way, stuck at the top or bottom of the screen, it can be distracting. Anything distracts the player is usually a bad thing; especially when you're exploring an abandoned spaceship and shooting space zombies. Deadspace is a game where nearly all interface components and visualizations are diegetic. 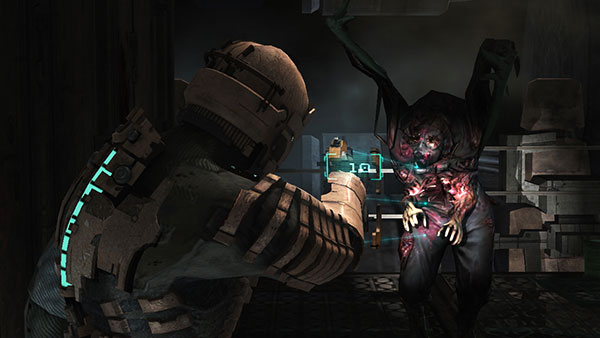 In this screenshot of Deadspace, there are at least three obvious pieces of data being visualized - and they all exist both in the game world and for the player.

First, the health bar. In Deadspace, your character's health is represented as cyan colored bars on the back of the in-game character (near the bottom left of the screen). Health is a status usually indicated by a bar chart; in Deadspace it's still essentially a bar chart but it's actually on the character in game.

Second, your weapon's ammunition count. Your gun has a sort of heads-up display with the amount of ammo left. It looks static in the screenshot, but that display actually exists in the game world, and moves around with the character. Both you and the character see the ammo displayed.

Third, the targeting lines. In games like Counterstrike or Call of Duty, a crosshair is usually used to indicate where your bullet will go. A crosshair is a non-diegetic interface component - the player in the world cannot see the crosshair; only you can. In Deadspace, there is no crosshair. Instead, you see a laser indicating where your bullets will fly. Both you and the character see these laser lines.

Visualizations in games need not feel "tacked on." They can be subtle. When playing Deadspace, my "health bar" does not feel like an explicit data visualization. The diegetic visualization of a health bar makes me feel as if it's giving me information without having to look at it. It creates more of an emotional reaction than an intellectual one.

With traditional visualizations, you know you're being given information. Bar charts and pie charts explicitly tell you a story about the data. There exists a great potential for games to contain data visualizations which inform the player in subtle ways. Visualizations which feel like they are part of the world - which may not even feel like visualizations at all - can be far more powerful for creating experiences.

How Data Visualization can Improve Games

Games have as much potential as any form of art, and possibly even more potential, to create powerful experiences. Writing, cinema, music, and painting all create experiences in the participant's mind. Like movies, games can include all other art forms (including games inside of games - 'minigames'), which can be used together to create novel experiences. Unlike other art forms, games are inherently interactive. With that interactivity comes a bigger potential for creating perhaps more powerful experiences, or having experiences emerge that the designers never intended. 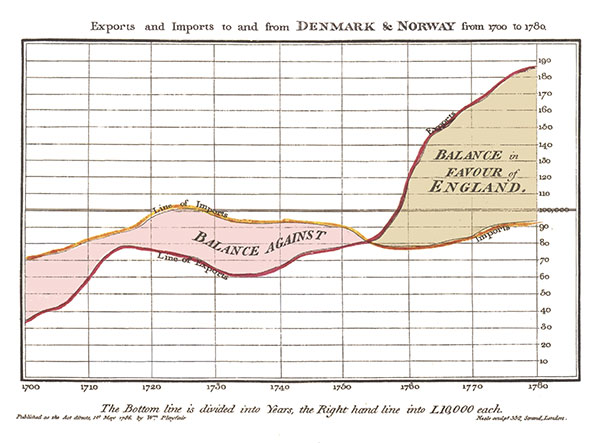 William Playfair was the founder of graphical methods of statistics - inventing the line and bar charts in 1786. Since then, we've seen a lot of novel data visualizations, such as Charles Minard's flow map of Napolean's Russian Campaign.